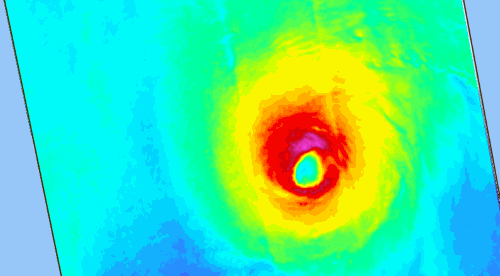 Douglas was the first cyclone to form in Eastern Pacific 2020 season, a rather late start in the season for the region.

Once the ECMWF forecasts were warning for a possible cyclone generation (July 20th), Sentinel-1 ESA’s Mission Planning team started to implement the acquisition strategy developed for Tropical Cyclone observations. The Sentinel-1A & B possibility of observations intersecting the expected locations of the cyclone’s eye over the following 5 days were pinpointed, so as to programme Sentinel-1 acquisitions using the largest swath, and also using dual-polarization, so as to deal as best as possible with the extreme wind speeds. The acquired Sentinel-1 data are then processed with up-to-date algorithms fitted for extreme events to retrieve the ocean surface wind fields.

The cross-polarized information acquired by Sentinel-1 SAR sensor do not suffer from signal saturation at high wind speeds, so are especially interesting for such extreme event as cyclones. Moreover, the resolution of the images enables to see fine details of the structure of the cyclone, such as the radius of maximum wind speed or the cyclone eye diameter and morphology. We can also see the structure of “calm” area within the eye itself. Here on Douglas we can also see that this radius of maximum wind speed is anisotropic, with higher wind speeds North (the cyclone is moving North-Westwards, towards Hawaii archipelago).

See below the sequence of acquisition made for Douglas monitoring